Khanyisile Momosa and his friends set off from an informal settlement near Gansbaai today on their way to commit a crime. They were going to poach perlemoen – what most of the world call Abalone.

Preparing Perlemone is time consuming. Once you've managed to get the virtually impenetrable shell opened – it  needs to be tenderised considerably to make it vaguely edible. Then it has to be flavoured and cooked by someone who really knows how – or you get a rubbery mass that just won't quit when you try to swallow. Frankly – the point of it escapes me. But in China – it is a delicacy.

As a result, Perlemoen is now a protected species in SA.

Khanyi and his friends rose up early in the spring cold. Made their way to the beach. Got into 16C/60F water and swam for two hours until they reached Dyer Island. When they got there, they free-dived for a couple of hours, stashing the heavy perlemoen in nets tied around their waists. And then started the two hour swim for home.

Dyer Island is the breeding ground of Jackass Penguins, Cape Cormorants and Gannets. Needless to say it is covered in bird shit. Which made a fortune for Samuel Dyer in the early 19th Century. He moved there, harvested guano and sold it on to mainland farmers as fertilizer. Nowadays it is mainly known for cage diving. People who get into steel cages in the water hoping to spot a monster shark. Because Dyer Island stands right beside a smaller island called Geyser Rock. And this tiny wind-blasted outcrop is the breeding mecca for Cape Fur Seals (50 000 of them).

Which makes it MacDonalds for the Great White Shark 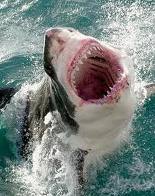 Great Whites usually come out of very deep water and hit their prey hard. These poachers had all been out there before. So, Khanyi probably did know what hit him. He probably also knew he didn't stand a chance.  His friends saw the shark breast the water, saw their friend's leg in it's mouth and swam like hell. Screaming. Khanyi's body later washed up on Pearly Beach.  Ironically, beside the lifeguard station.

I cannot find it in my heart to condemn any of these men for breaking the law. Only the desperate undertake a swim like that in these frigid waters. Risking their lives for whatever pittance the middle-man gives them before he sells the shellfish on for real money. To people who will never know, nor care about; the real provenance of their dinner.

We're looking for staff at Knead right now. I know it's unlikely that any of these men will apply. But if they do, I will do my utmost to place them. With a determination, drive and work-ethic like this – they are capable of great things.